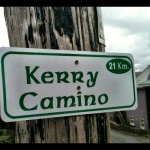 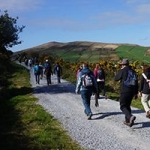 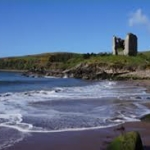 I’m sure you’ve heard of “Camino de Santiago”, also known in english as “The way of St.James” which is one of the most important Christian Pilgrimages during the middle ages. The route ends at the Cathedral of Santiago in Spain where St. James’ remains are buried. Today, hundreds of thousands of Christian pilgrims and others, make the pilgrimage by foot or bike each year. There are many different routes throughout Europe.

Ireland has it’s own version called “The Kerry Camino” from Tralee to Dingle in the West of Ireland. The route is believed to have been followed by St.Brendan the Navigator in 512 AD. Dingle was one of the original departure points for boats that took Pilgrims to Spain to continue their pilgrimage by foot. It is recognized as being one of the most scenic walking routes in the country. With breathtaking views over the Atlantic Ocean and the mountains of Kerry, the walk will bring you through areas of stunning natural beauty and small villages with cosy pubs and friendly locals. If you are looking for a short walking break in Ireland, this should be top of your list. There is also an annual Kerry Camino Festival You can check out this and many more fabulous walking and biking routes throughout Ireland HERE